Advanced steam tactics for your game.

Learn from 3 studios on the best practices they follow to improve their Steam presence, analytics and engagement.

For this event, we have brought together a panel of seasoned game professionals to discuss different aspects of putting your game on Steam that participants might not have considered before. The attendees got a better understanding of the breadth of opportunities available to make their game stand out on Steam as well as the work that’s needed to improve their Steam tactics and strategy. 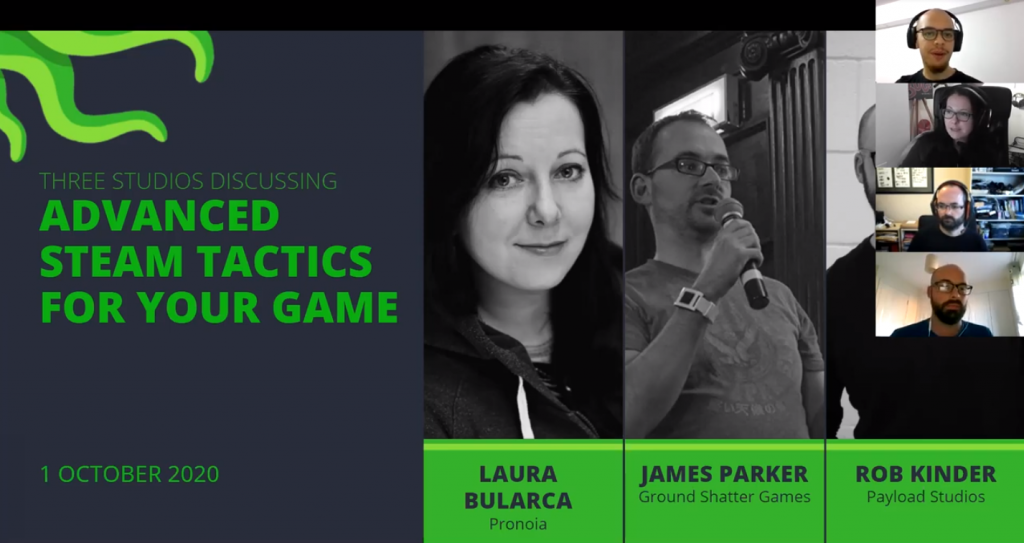 Laura is the founder of Pronoia AB. She has been active in the games industry since 2000 and wore many hats, including creative director, designer, producer and CEO. Her strongest skills are in production, strategic business and publishing. She tweets a lot of indiedev tips.

James Parker has been kicking around the games industry for over 20 years variously as a games designer, script writer, and occasional bad coder. In 2014 he founded Ground Shatter, a boutique studio focussing on high-intensity action-influenced titles for PC and console, including SkyScrappers and RICO. Ground Shatter is currently developing the turn-based, tactical, deck-building, action movie-em-up Fights in Tight Spaces. James is also a director at The Bristol Games Hub, a non-profit co-working space and wider network centred on supporting and boosting the profile of the city’s game development community.

Rob has 14 years of experience in building, launching and running games on PC, console and mobile. He specialises in the more commercial aspects of game production, currently being the Publishing Director at Payload Studios, doing all things commercial. Rob also runs the Tentacle Zone showcase at shows like EGX and Insomnia.

PrevPreviousMarketing Your Game, If You Have Limited Time for Marketing
NextGetting Ahead in Game MarketingNext