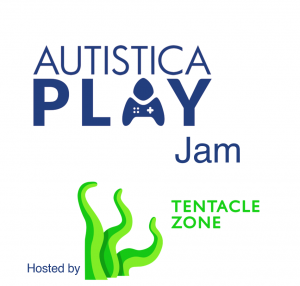 Take part in the Autistica Play Jam, an inclusive game jam designed by the Tentacle Zone at Payload Studios and the charity Autistica.

Starting on the 2nd of March 2020, autism research charity Autistica and Tentacle Zone Workspace at Payload Studios is hosting the Autistica Play Jam! Participating game developers will be asked to create a game tackling one of three themes related to autism. The event aims to be inclusive to autistic players and raise awareness and funds for autism research.

The Autistica Play Jam concept is simple: a no pressure game jam. The participants choose a theme and develop a game over the course of a week, either on their own or in teams. A number of adjustments will be made to improve the experience for autistic participants:

A panel of judges selected by Autistica and the Tentacle Zone will play the games and create a shortlist. The shortlisted games will be presented on World Autism Awareness Day (WAAD) at the British Film Institute (BFI) during the London Games Festival week at the annual Autistica Play 2020 event.

“Payload Studios and the Tentacle Zone are really glad we are taking this step in partnering with Autistica Play. By combining game developer ingenuity and the research Autistica Play have done, in a relaxed and inclusive game jam format co-designed by the Tentacle Zone team and the charity, we hope for fun and meaningful results to be enjoyed by many.”

“We know that autistic people are often drawn to games as a way to socialise, build skills, have fun and relax, so it’s vitally important that the industry and games community are inclusive. As a charity, we are super excited to partner with Tentacle Zone at Payload on a remote jam that is inclusive and fun for all, whilst improving understanding for autism and raising funds for research.”

Join the community of makers on Discord

Donate to Autistica on JustGiving

Autistica is the UK’s autism research charity. Their vision is a long, happy healthy life for all autistic people and their families. AutisticaPlay is the games arm of Autistica. By working with the players and creators of games they hope to improve support for autistic talent in the industry, increase understanding of autism and raise vital funds and awareness. Find us on Twitter at @Autistica.

We were founded in 2013 by Russ Clarke and Vincent Scheurer to make our flagship game, TerraTech. We’re now a team of 25+ passionate developers (2018) with an even mix of new graduates and industry veterans, with a strong track record in PC, console and mobile.

About the Tentacle Zone

The Tentacle Zone is an independent developer community initiative founded and coordinated by Payload Studios. The mission is to help small indies and startups connect, share knowledge and resources, and collaborate for mutual success. When Payload Studios moved into their current office in Farringdon, London, they decided to add co-working space to the Tentacle Zone offering, and they now have seven other teams sharing the space. Payload Studios also use the premises as an events venue, with a busy program covering a range of relevant subjects, such as marketing, technology, business and diversity, as well as game jams and social mixers. If you would like to know more about the Tentacle Zone, you can follow them on Twitter here: https://twitter.com/tentaclezone